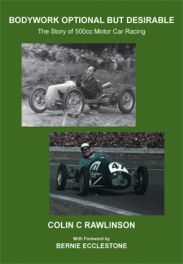 The title for this book, Bodywork Optional But Desirable, is taken from the original rules drawn up in 1947 for those intrepid individuals interested in constructing a racing car to compete in the 500cc category. Equally it could have been called ‘No reverse gear necessary’.

These early constructors had some excellent examples to follow as 500cc cars, constructed by Charles and John Cooper, Clive Lones and Colin Strang, had been competing in hill climb events in 1946.

‘Motor racing for the impecunious’ as it became known was noted for the enthusiasm of the constructors and drivers and provided some enthralling entertainment for spectators from the late 1940s to the early 1960s. Today’s owners and drivers have no less enthusiasm for these diminutive racing cars, despite the rising costs and an increasing difficulty in obtaining parts.

This book covers the story of the 500cc cars from their inception, to their acceptance as International Formula 3 and through to the modern day.