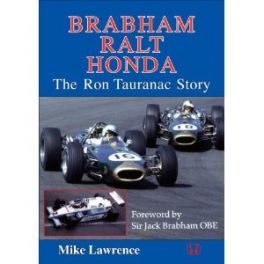 Until now, the man whose racing cars have won more victories than anyone else's, and whose design skills have brought fame to hundreds of drivers and made champions of a good many of them, has remained in the background.

Ron Tauranac - British-born, but brought up in Australia - always preferred to let his cars sing his praises where it really mattered - on the race tracks of the world. They have never been known as Tauranacs, but the names Brabham and Ralt will be very familiar to anyone who has followed motor racing since the Sixties. And so, of course, is Honda, the company which supplied the engines for some of Tauranac's most successful Brabham and Ralt racing cars and with which he still retains close links as a design consultant, working behind the scenes on several of their motor racing activities.

Author Mike Lawrence was one of a growing number of people who felt that Ron Tauranac's significant contribution to modern motor racing should be shielded from public view no longer, for there was a fascinating story to be told. It is one which weaves the familiar motor racing fabric of brilliant success laced with occasional bitter disappointment, and it has at its centre a man who throughout his life has never walked when he could run, has at times been insufferably demanding and a pain to work for, but whose skills, dedication to hard work, honesty and integrity have been such that those who have suffered the most from his tongue remain amongst his most fervent admirers.

Sir Jack Brabham, in his foreword to this long overdue biography, pays generous tribute to his former business partner into whose hands he entrusted the design and construction of all his own racing cars from 1962 until his retirement from driving in 1970, plus all the production Brabhams which brought so much success to many other top drivers during their formative years.

Sir Jack himself and his team-mate Denny Hulme both became Formula One World Champions in Tauranac-designed cars, many other drivers have won National and International championships in them, and nearly everyone who sits on a Grand Prix starting grid today has previously been a Ralt driver, along with former stars like Ayrton Senna, Nelson Piquet, Nigel Mansell, Derek Warwick and Martin Brundle.

Many of Ron Tauranac's former colleagues and customers - amongst them the most powerful people in motor racing today - speak candidly about the man they have known and worked with, someone who has never courted popularity, but whose talents have been such that his contribution to the motor racing scene is possibly beyond measure. Anyone who is either involved in the sport or fascinated by it will be delighted that through this book The Ron Tauranac Story has finally been told.

Ron Tauranac has designed racing cars for over forty years and Mike Lawrence's book documents his work in detail - particularly with regard to Brabham, Honda and his own Ralt firm. It is a superb biography of one of the pivotal figures in motor sport. It provides an educational outing into the world of open-wheel race car productions. Virtually anybody who was somebody in racing has made an appearance here. If you are looking to learn the truths of who, why and when, then this is the book for you. With 288 pages and 62 photos and illustrations. (First published by Motor Racing Publications in 1999). SB.