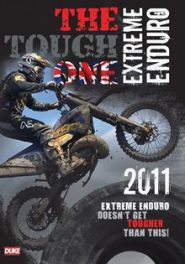 For 2011 The Tough One headed to the incredible Black Cowm Quarry in Lancashire, where competitors would be faced with a technical and demanding course of just under 5 miles. In pursuit of victory the dirt bike stars would face steep rocky climbs, rapid descents, mud, slippery surfaces, logs, tyres, deep pools and even the inside of a lorry trailer!

This comprehensive review brings fans fast-paced action from the Sportsman’s race for Club and Veteran riders, the Speed Trial and the main event itself, the three-hour, muscle-straining, bike-busting International Tough One. We are treated to the very best footage as the riders demonstrate how to get it right – and often how to get it wrong – as they battle each other, the conditions, the taxing quarry course and utter exhaustion.

There are interviews with the stars and a chance to sample The Tough One yourself courtesy of a series of helmet-mounted cameras – just a few moments of ‘on-board’ footage will leave you out of breath, so just imagine what it’s like for the racers!