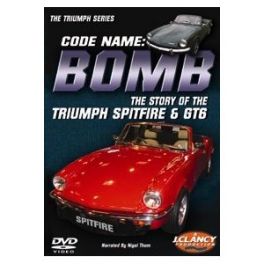 Triumph Spitfire and GT6 Double DVD Also covers Triumph Herald Codename: Bomb - The Story of the Triumph Spitfire & GT6 A J Clancy Production supplied by Clas6 classics Despite being a feature mainly on the Spitfire and GT6 naturally covers the Triumph Herald to a fairly large extent. And as it is being released during the 50th anniversary of the Herald it is fitting that the chassis engineer on the Herald gives us his insights into the development of this car within the extra feature 'The Men Behind The Motors'. The main disc runs for approximately 80 minutes, the extras disc about 90 minutes. Every different model within the Spitfire/GT6 range is covered along with the Works race and rally programmes which garnered much praise for the Standard Triumph marque. Helping tell the story this time are:- * Graham Robson - Triumph Competitions Secretary * Gordon Birtwistle - Triumph High Speed Test Engineer and 'Deputy Competitions Supervisor' * Tony Lee - Chief Development Engineer. * Ralph Wigginton - Herald Project Engineer * Dave Keepax - Triumph stylist * John Ashford - Triumph stylist. * Richard Hunt - Triumph stylist. * Bernard Robinson - editor of the Triumph Sports Six Club magazine * Mark Field - Jigsaw Racing Services and owner of ex-works rally car ADU 7B and the race car, ADU 1B. * Dave Pearson - Canley Classics who owns the ex-works race car ADU 4B and the Macau Racer DISC 1 (80 minutes approx.) CODE NAME: BOMB - THE STORY OF THE TRIUMPH SPITFIRE & GT6 The main feature telling the history of the cars from the Herald origins, the original 'Bomb' prototype, the Works rally and race car programmes, all the way to the GT6 MK3 and Spitfire 1500 models. DISC 2 (90 minutes approx.) TRIUMPH SPORTS SIX CLUB INTERNATIONAL 2009 A DAY AT CANLEY CLASSICS A DAY AT JIGSAW RACING SERVICES ALL-TRIUMPH RACE MEET 2009 TRIUMPH SPORTS SIX CLUB HQ MORE MEN BEHIND THE MOTORS NEW FOREST RUN 2009 BERNARD'S MACAU RACER REPLICA