Group B - The rise and fall of rallying's wildest cars 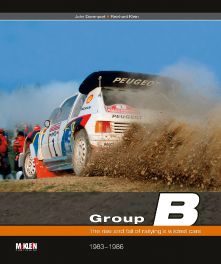 Group B - The rise and fall of rallying's wildest cars

They were the most exciting cars ever to have graced the international rally scene. To this day, many fans still consider Group B to be the epitome of madness on wheels. Never since have engineers had such a big freedom of choice extreme rally cars as they did during that fantastic era of the early 1980s.

This book tells the story of the cars developed within Group B, from the Quattros to the outstanding Lanciad and Peugeots and to the sports cars from Porsche and Mazda. But all the techical development came to a head in the year 1986, when the euphoria somehow turned into an ungovernable risk. The mischief of the engineers, politicians and fans led to tragic accidents, which finally resulted in Group B cars being banned from international rallies.