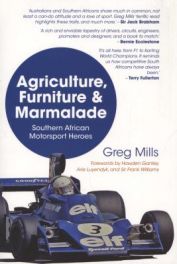 Jody Scheckter, to date South Africa's only Formula One World Champion, received the following advice from Jackie Pretorius on his departure for fame and fortune to England in 1971. 'Jackie pulled me to one side and told me that I had to learn some big words to impress the Europeans. He said he would give me three then and there – Agriculture, furniture and marmalade – preferably to be used in conjunction with one another.' Many the drivers and designers covered here pursued their careers in an era when deaths in motorsport were commonplace, a reflection on the tracks, the cars, and on the cavalier attitude of drivers themselves. For them, it was an era of la dolce vita; for the public, braaivleis, sunny skies, Formula One and international sportscar racing. This book covers those Southern Africans who made it as drivers, engineers, mechanics, and promoters in international motorsport, from Woolf Barnato’s three victories in the Le Mans 24-Hour classic to the era of Sarel van der Merwe.