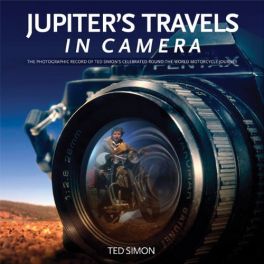 For four years during the 1970s Ted Simon rode a motorcycle around the world at a time when such long-distance rides were still very rare. He wrote about his adventures first in occasional reports to The Sunday Times and then in his book Jupiter s Travels (Penguin), which has become revered as a classic of travel writing. Ted took two small Pentax film cameras with him, but only a handful of his several thousand colour photographs have ever been published hence this book. Here Ted retells the story of his epic adventure through his favourite photographs. Contents: The illustrated record of the most famous solo motorcycle journey around the world. Complements Jupiter s Travels, the classic of travel writing that has sold nearly a million copies, and was the inspiration behind Ewan McGregor s and Charley Boorman s Long Way Round. Packed with high-quality colour photographs taken en route. Published on the 40th anniversary of the start of Ted Simon s original journey.