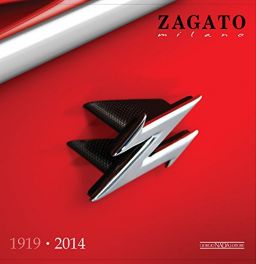 A newly updated and revised edition of the book Zagato-Milano 1919-2009 that appeared in 2009 for the 90th anniversary of the marque.

In 2014, Zagato - a name closely associated with both the history of motor racing and the history of automotive style - celebrated its 95th anniversary. Ugo Zagato founded "Carrozzeria U. Zagato & C." in 1919. Within just a few years, the company had achieved fame among performance car manufacturers, beginning with Alfa Romeo, who gave the Milanese stylist the task of building the body for the unforgettable 6C 1750 and the 8C 2900 in the 1930's. Zagato's reputation continued to grow after the Second World War, when there appeared in sequence the Fiat 8V, the Alfa Romeo SZs and almost all the Lancia sports coupés.

Zagato Milano 1919 â?? 2014 recounts the company's extraordinary story of technology and style, sub-divided into decades and told in short passages of text illustrated by an outstanding collection of beautiful archival photography.

Including color profiles of all Zagato, from the S.V.A. 5 bi-plane used by Gabriele D'Annunzio for his flight to Vienna in 1918 to the latest concept cars.