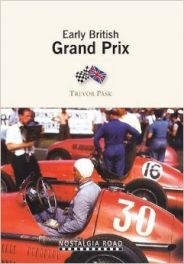 Motor racing originated on French public roads and could be said to have begun in Britain in May 1899 with a series of time and load carrying trials at Crystal Palace Park in London. Later in the same year, races for several classes of vehicle – cars, motor cycles and tricycles – were held on a small banked oval cycle track in the park.
Organisation was quickly imposed by American newspaper magnate – Gordon Bennett who established the Gordon Bennett cup for international competition in 1900 and rules were established.
Striving for more speed, engines became more powerful and noisier and after 1903, races were held on relatively short circuits of public roads on which the cars made a number of laps. A universal ‘Formula’ or set of rules for the engine capacity and weights of competition cars was devised as early as 1904 and a 1906 event organised by the Automobile Club de France was held over closed triangular 65 mile circuit at Le Mans and called a Grand Prix – Large Prize.
The term Grand Prix soon became associated with any motor race where international competition was invited. In 1908 a ‘Grand Prix’ race being held in the United States followed by an Italian Grand Prix in 1921, a Belgian and Spanish Grand Prix in 1924 and finally, a British Grand Prix in 1926.
As the taste for motor racing developed so did the circuits including Aintree where Stirling Moss scored his first World Championship Grand Prix victory in 1955, Silverstone, Brands Hatch, Brooklands and Goodwood and Early British Grand Prix highlights the development of British motor racing circuits over the last century.