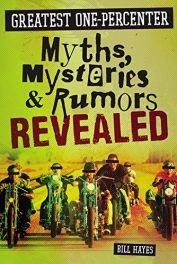 Pretty much everything the world has ever heard about one-percenter motorcycle clubs has been pure, unadulterated bullshit. Take the so-called Hollister riot of 1947 that started it all.LIFE magazine convinced America that what Hunter Thompson called "The Menace" was about to ride into town spewing rage and thirty-weight motor oil, and America believed it.

So what really happened in Hollister? Greatest One-Percenter Myths, Mysteries, and Rumors Revealed divulges the truth about that incident and many more legendary events, including the Great Nordic Biker Wars, what really happened to the Easy Rider bikes, and the truth behind the Laconia Riots of 1966. The truth will be revealed, but only if you crack the spine on this book and read the real story.