FITZ: My Life At The Wheel, John Fitzpatrick. 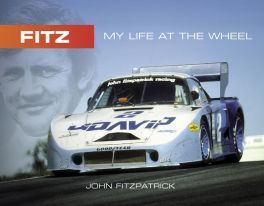 FITZ: My Life At The Wheel, John Fitzpatrick.

British race-car driver John Fitzpatrick’s long-anticipated autobiography, Fitz - My Life at the Wheel, will launch during the iconic Goodwood Revival Meeting Sept. 9-11, 2016. Published by Autosports Marketing Associates, Ltd., based in Butler, Maryland, in the United States and distributed in Europe by Chaters Motoring Books in the U.K., Fitzpatrick will be signing his new book at the Chaters and Hortons stands during the Revival. Owned by another auto racing veteran, Michael Keyser, Autosports Marketing has published a number of popular books on the world’s prominent race-car drivers, race tracks and industry leaders. This book marks Keyser’s 13th volume of work chronicling the exciting history of motorsports, both in the U.S. and Europe. Additional information may be found at www.autosportsltd.com. The book will be available in the U.S. early in September. Fitzpatrick’s racing career spanned 22 years of competition in Europe and the U.S., winning numerous championships on both continents, while driving for a variety of works teams, including Mini Cooper, Ford, BMW, Abarth, Jaguar and Porsche. “I am happy to have finished my book about my life in motorsport,” said Fitzpatrick. “I have enjoyed recalling all the highs and lows of my life and career and I am pleased to be able to share them with the readers. I would like to thank my publisher Michael Keyser for all his hard work and patience. “Hundreds, if not thousands, of young boys dream of becoming a racing driver,” he added. “But a few, a very few, will become successful at such an endeavor. The extraordinary mixture of opportunity, single-minded determination and sheer luck that allowed me to join the ranks is the subject of this book. My dream came true, and I’m delighted to share my story.” Fitz - My Life at the Wheel includes 131 black-and-white and 236 color photographs, many never before published, with 13 chapters of thrilling yet heart-warming accounts of the life of a man with a purpose - to be the best. Fitzpatrick is now retired and living in the south of Spain with his wife Sandra.

For a time John Fitzpatrick had aspirations to become a professional golfer, having won numerous junior championships, but after falling from a tree he was climbing with some friends and breaking both his wrists his golf game was never the same. What to do now?

His father promised John that if he didn’t smoke or ride a motorcycle before his 17th birthday he would buy him a car. John did neither and when that day arrived his father was true to his word, rewarding his son with a new Mini.

In 1962 John began competing in and winning local events in the car, and a chance meeting with Ralph Broad of Broadspeed fame proved to be a turning point his life. He was first hired by Broad to drive for his team in a Mini, then the Cooper Car Company. Returning to Broadspeed, he found himself competing behind the wheel of Ford Anglias and then Ford Escorts.

At a race at Daytona in 1972 John met Erwin Kremer, a German team owner from Cologne, who hired him to drive his 911 in European events. His many victories that year resulted in his winning both the European GT Championship and the Porsche Cup

While competing in Porsche RSRs for both the Kremer and Georg Loos teams, he raced Ford Capris and BMW CSLs. From 1977 to 1982 he drove multiple versions of the potent turbocharged Porsche 935 for the Barbour, Kremer and Loos teams, winning the IMSA Championship in 1980 and the Porsche Cup for a third time. In 1983 he moved up to a Porsche 956, capping off his career that year by defeating the Rothman Porsche works team in the rain at Brands Hatch.

Illustrated with 128 black & white and 231 color photographs, and written in his own words, Fitz: My Life At The Wheel chronicles John’s twenty-two years competing on many of the most famous circuits in the world in some of the most iconic cars of the 60s, 70s and 80s.

John Fitzpatrick was born on June 9, 1943 in the city of Birmingham, England at the height of World War II.

When his chosen career to be a professional golfer was side tracked due to an accident in which he broke both his wrists, he set out instead on the road to becoming a professional racing driver.

Starting out behind the wheel of a Mini in 1962, he steadily climbed the ladder of the sport over a span of twenty-two years, racing a broad variety of cars. In the process he reached the very pinnacle of the motor racing world. Retiring from competition at the end of 1983, he continued on for the next three years as a team owner.

After moving to Spain and a brief hiatus from the sport, he returned to the England in 1999 where he served as Secretary of the BRDC (British Racing Drivers Club) for seven years.

Now retired, John lives on the south coast of Spain with his wife of many years Sandra, enjoying visits from their children, the sunshine and playing golf as often as possible.