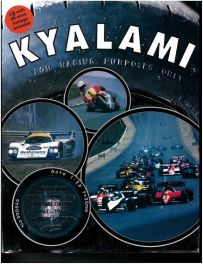 Written by André Loubser, with the foreword by Jody Scheckter, ‘KYALAMI – a reflection on the history of the original circuit 1961-1987′ celebrates the much-loved original track that existed before the upgrade 24 years ago.

Its 400 pages provide a definitive history of the original circuit, which drew up to 100 000 spectators in its hey day of SA Grands Prix, Nine Hour and Wynns 1000 endurance races and the like.

The book contains over 1100 photos, many of which have never before been published. The author has covered the early days of motor racing in South Africa and thereafter the international events held at Kyalami, including the respective entry lists, qualifying grids and results.

A special chapter is also devoted to the famous Kyalami Ranch located just up the road from the circuit, which hosted most of the international drivers.

Kyalami was researched and written over a 25-year period by Capetonian, André Loubser, a long-standing member of the SA Guild of Motoring Journalists and contributor to UK motoring magazines.

André has dedicated this book to Sir Stirling Moss, whom he first met when he sold him a Porsche 904, for his racing team, SMART, whilst heading up the VIP customer sales department at the Porsche factory in Germany.

He later worked for the Stirling Moss Paint-a-Car System in the UK and remain good friends today, some 47 years later.

In 1984, André heard rumours that the much-loved Kyalami might be sold to make way for a housing estate. Based on the adage of no smoke without fire, he felt that the end of the circuit could be in sight.

The rumours proved to be partially correct as the top half of circuit, consisting of the main straight, the pit complex and grandstands, was sold off in 1987 to become an office park.

In 1988, a new, revamped, anti-clockwise circuit was introduced using portions of the original circuit between the exit of Jukskei Sweep through Sunset, Clubhouse, the Esses and the lower part of the hill up to Leeuwkop Bend, where the present track turns left towards what is now known as the “mineshaft”.

In 1986, André started researching and writing the history of Kyalami from the time the search began to find a suitable site, the design considerations and the construction undertaken by Basil Read to the holding of the last international race in 1987.

When recollecting important activities in life, a kaleidoscope of memories flood back. The original Kyalami racing circuit, in particular, evokes nostalgia, as it was here that, as a teenager, I started racing on a shoe-string budget and it was here that I won the SA Grand Prix in 1975. It’s also very strange which incidents remain in one’smind. I still recall jumping out of my Renault 8 and running over towards Percy Trehair, the Champion representative, to check if I had the right mixture and timing, which was of course vital information. I recall Alex Blignaut paying us R34 starting money to come up from East London to race, and then at a subsequent meeting, disqualifying us as the Renault was too low. I just said that I never read the rules, I simply copied Scamp Porter’s works Renault! Later in the season, with a supercharger fitted to the Renault 8, which incidentally qualified faster than the works Ford Capri six months later, I remember taking Barbeque and Jukskei absolutely flat out on the first lap. My right leg was shaking uncontrollably from nerves, so I took my right hand and pressed my leg down in order to keep the accelerator flat on the floorboards. Later, as my right leg steadied, I could keep both hands on the steering wheel, which made it easier to go flat out and a little bit sideways, which earned me the nickname ‘Sideways Scheckter’.

remember how I eased the accelerator with the car on tiptoes. And then there was my first Formula Ford

race, spinning six times at Clubhouse in an eight lap race. My mechanic had not set the car up properly

and had simply tightened most of the bolts.

The 1975 SA Grand Prix was one of the highlights of my career. I had crashed the Tyrrell Ford in the last

official qualifying session, writing the car off and during the Saturday morning session (race day) the

engine of my training car blew up. Ken Tyrrell and his mechanics fitted a new Ford Cosworth motor in a

record three hours, instead of the usual four, making sure that I was on the grid in time. I took the lead on

the second lap and went on to win. The crowd went mad and on the parade lap, in true South African

fashion, I even had a few beer cans thrown at me. I assumed at the time that it was an act of hysterical

joy and not a personal attack!

Another lasting memory was joining Ferrari for the 1979 season, finishing second behind my team-mate,

Gilles Villeneuve, in the SA Grand Prix and going on to clinch the World Championship at Monza, quite

racing history – KYALAMI as it used to be.