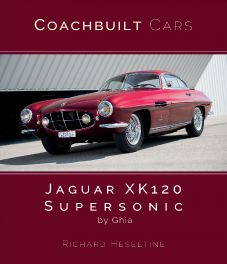 In this, the first in Porter Press’s new ‘Coachbuilt Cars’ series, author Richard Heseltine has untangled the Ghia Jaguar XK120 Supersonic’s complicated story of British design brilliance and Italian design artistry. Built on Jaguar XK120 chassis number 679768, this car wasn’t unique: two other examples were made in 1954. But the trio was just one part of the charismatic Supersonic canon, which began with a one-off GT intended to contest the Mille Miglia. This tale, of how Ghia wowed the car world with its jet-age styling, takes in several fascinating characters whose names have peppered the post-war story of Italian car design, engineering and racing.

• In-depth background on Carrozzeria Ghia examines the Italian coachbuilder’s efforts to spread across Europe and ‘crack’ the US market, which it did – in a way – by adding design stardust to Chrysler cars and creating the hugely popular Volkswagen Karmann-Ghia.

• The birth of Supersonic design as an Alfa Romeo-powered GT is covered in great detail, and the author goes on to explain how ostensibly the same car carried the badges of Aston Martin, Fiat and even AC/Shelby as the show-stopping, wind-cheating shape was adapted to a wide variety of other chassis.

• Readers will discover how the original Supersonic was the work of Giovanni Sovanuzzi – the genius designer-engineer famous for the Cisitalia 202. Meanwhile, race team legend Virgilio Conrero was first to put fire in the Supersonic’s belly, while fiery Ghia chief Luigi Segre used the car to woo North America.

• A fascinating line-up of other Italian-bodied Jaguar XK sports cars are examined and illustrated, as a way to compare and contrast the Supersonic with the work of other accomplished Italian designers.

• The history of chassis number 679768, is chronicled, recounting its elusive first owner, its lengthy periods hidden from public view, and its status today as the prized centrepiece in a private collection.

• Stunning contemporary photography of the car is mixed with rare and fascinating archive images.

Author and journalist Richard Heseltine writes with a focus on classic and contemporary performance cars and motor sport history. A former staff member of Classic & Sports Car and Motor Sport magazines, he is the author of books on subjects as diverse as small-series British sports cars, Italian coachbuilding, Ferrari design history, and a biography of racing driver and team principal Graham Warner. Richard lives in Shropshire, where he attends to a coachbuilt Italian classic of his own – a 1966 Moretti 850 Sportiva.