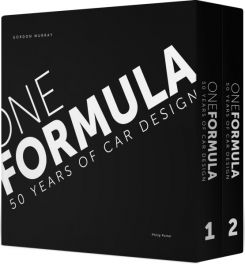 Gordon Murray is one of the greatest automotive designers of all time, and this new book from Porter Press tells the inside story of his illustrious career - year by year and car by car. Award-winning author Philip Porter has worked closely with Gordon to produce a two-volume set that covers everything from his early life in South Africa and his ground-breaking Brabham Grand Prix cars to multiple Formula One championships and Le Mans success with McLaren. The story continues right up to the present day via the pioneering work that’s being done at Gordon Murray Design. With extensive contributions from the man himself and exclusive access to his vast archive of photographs, sketches and technical drawings, this is the definitive account of the life and career of a genuine automotive genius.

Key content
- Covers every single one of Gordon Murray’s designs, from 1967 to the present day, including his fascinating ‘Ghost Cars’ - designed but never built - and the inside story of some of the greatest cars ever made, including the Brabham BT49, the McLaren MP4/4 and the McLaren F1.
- Entertaining insight into the legendary Brabham BT46B ‘fan car’ that won the 1978 Swedish Grand Prix.
- Looks at the revolutionary iStream production process and the next generation of automotive designs.
- Contributions from key figures in Gordon’s career, including Bernie Ecclestone and Alain de Cadenet.
- Two-volume set with almost 1000 pages in total, plus superb archive photography and a wide selection of Gordon’s own drawings, notes and sketches.