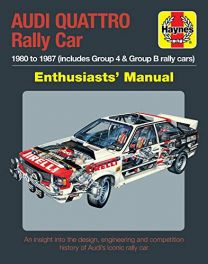 The original rally Quattro debuted in 1980, and was based on the road car, but with a highly tuned 300bhp engine. In 1981, Audi Quattro works driver Michele Mouton became the first woman to win a World Championship rally. The Quattro took the Manufacturers' Championship in 1982 and 1984, and the Drivers' Championship in 1983 and 1984 with Hannu Mikkola and Stig Blomqvist respectively. Audi implemented a continuous development programme for the Quattro, and the A1 and A2 were produced to meet the Group B regulations introduced in 1983, while the fearsome Sport Quattro S1 was introduced in 1984. The ultimate development - the S1 E2 - was introduced at the end of 1985, producing over 500bhp, and winning the 1985 San Remo rally in the hands of Walter Roehrl and the famous Pikes Peak hillclimb with Michele Mouton. This Manual looks at the design, evolution, anatomy and operation of the Quattro.