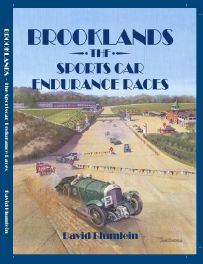 Long-distance motor races were becoming popular in the late Twenties, the Le Mans and Spa 24-hour events being firmly established by this time. It was felt that Britain needed to hold such races but, whereas the Continental countries used their public roads to form circuits, this was not permitted in England the only venue available then was the Brooklands track.

This is the first detailed history of the races which took part on the famous banked circuit which required artificial chicanes to render it more akin to a road circuit.

The text is well illustrated with period photographs, not only of each specific race but also some chosen to convey the atmosphere, character and history of Brooklands.

Detailed diagrams show the variations of circuit layouts used, and there are chapters listing interesting facts that “followed on” from the races and some of the productions cars which subsequently proudly adopted the name “Brooklands” to emphasise their sporting nature.