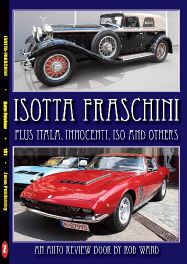 As we surveyed car marques still to be covered in the Auto Review series, there were two classic Italian marques near the top of the list, Isotta Fraschini and Itala. Then we realised that a number of other important Italian marques also began with the letter ‘I’. There was Iso and Innocenti, Intermeccanica, Italdesign, even Iveco… As we embarked on the task of fitting them all into one Auto Review volume, it was suggested to us that it would be impossible. But no, all these important names have found their way into these pages, along with some other stories as well.
The name Isotta Fraschini is often coupled with Hispano-Suiza when discussing classic cars of the inter-war period. The Hispano-Suiza was a superior car in almost every aspect, however, though the long and sturdy Isotta chassis provided a platform for many superb luxury car bodies, especially popular with American buyers. They were never ‘driver’s cars’, but that was unimportant to owners, who left that activity to their chauffeurs. Lord Montagu labelled the Isotta Fraschini ‘The Italian Aristocrat’, whereas his tag for the Itala was ‘Italian Traditional’. Italas were effective Mercédès-inspired racing cars in the Edwardian period, and one was chosen by Prince Scipione Borghese to enter the Peking to Paris ‘raid’ of 1907. Everyone knows that the Itala was the first to arrive in Paris by a wide margin, because Borghese, though he was regarded as a gentleman and a sportsman chose to regard the event as a race.
Innocenti, who were famous as the original
producers of Lambretta scooters, went on to licence-build BMC cars in Italy. Iso, also producers of scooters and Isetta bubble cars, made American-engined cars in later years, and Intermeccanica also favoured the Italian-American theme. Many cars were designed for major manufacturers worldwide by Guigiaro’s Italdesign studio, which also produced cars under its own name after being acquired by Fiat.
Iveco was the name chosen by a Fiat-led international consortium for its extensive range of trucks and buses. Then we have the other Italian companies whose name began with ‘I’…