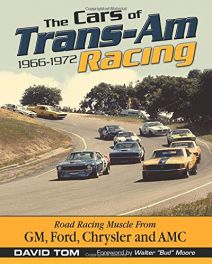 The legendary history of the pony car wars comes to life in this softcover edition of The Cars of Trans-Am Racing.

The SCCA Trans-Am Racing Series launched in 1966 and was designed to showcase a new class of sporty domestic cars racing on road courses. Each major automotive manufacturer participated heavily in the Trans-Am Series, and in a few short years, it became the ultimate American automobile showdown. When the modified muscle cars of the series were seen performing well on the country's finest tracks, fans wanted a model of their own in the driveway. These "pony cars" boasted a new look and style not seen before, and their all-around performance eclipsed anything accomplished by production-based American GT cars up to that point.

This softcover edition of The Cars of Trans-Am Racing is unique in that it focuses on the cars used in this legendary series. These vintage Mustangs, Camaros, Challengers, Barracudas, Firebirds, Cougars, and Javelins all are extremely popular with collectors and enthusiasts today. Seeing them in their "full-competition" versions when they were new will bring back many fond memories for those who were fans of this series. In addition, enthusiasts who enjoy these cars today look to the Trans-Am Series cars for styling inspiration and performance hints as part of the growing Pro Touring trend.

Many of these historic cars have been restored to race-ready condition. Additional insight and interviews from the original builders and the teams that maintained the cars provide an insider's viewpoint never before seen in print.