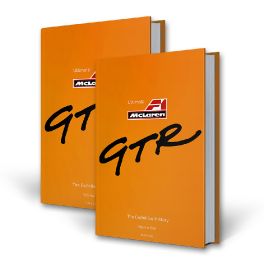 Stock Arriving 16th of November, we will dispatch as soon as this arrives

Volume 1 is a detailed definitive history and race record of all examples.
Volume 2 covers individual histories of each example.
Twenty-five years on from its famous début victory in the 1995 Le Mans
24 Hours, the wonderful McLaren F1 GTR is the subject of this major two-
volume history. Derived from the BMW V12-powered three-seat McLaren
F1 road car, the F1 GTR only came into existence because of customer
pressure on designer Gordon Murray to produce a racing version. With 28
examples built over three seasons, the F1 GTR was fabulously successful,
winning 41 of its 131 races and taking two international championship
titles. This sumptuous book outlines the life of the McLaren F1 GTR in
exhaustive depth, with Volume 1 devoted to race-by-race narrative and
Volume 2 to individual car histories and the stories of the people who
raced them, all supported by over 775 colour photographs.
Key content
 Design and development of the F1 GTR, including thoughts from Gordon Murray, the car’s designer and
also writer of this book’s foreword.
 Racing in 1995: besides the celebrated McLaren victory at Le Mans, F1 GTRs dominated the BPR Global
GT Endurance Series, winning 10 of its 12 rounds, with John Nielsen and Thomas Bscher narrowly
emerging as champions in Bscher’s West-sponsored car.
 Racing in 1996: a second all-conquering BPR season delivered the championship title to Ray Bellm in his
Gulf-sponsored car, partnered by James Weaver, while a campaign in Japan’s national championship
saw John Nielsen and David Brabham crowned champions.
 Racing in 1997: the F1 GTR evolved into Long Tail form and a BMW-funded team arrived to join the
action, taking all five McLaren victories in the new FIA GT Championship, although the Schnitzer-run
team’s quickest drivers, JJ Lehto and Steve Soper, narrowly missed out on the title.
 Racing in 1998: Steve O’Rourke’s privateer F1 GTR Long Tail achieved a remarkable fourth overall and
the GT class win at Le Mans, but by now the FIA GT Championship had become a Mercedes benefit and
the two participating McLarens were outclassed.