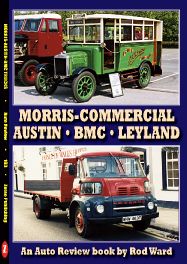 Here we have the stories of two British firms, Austin (from 1908 onwards) and the Nuffield organisation (as Morris-Commercial from 1924) who often competed against each other producing commercial vehicles, before combining as the British Motor Corporation in 1952. The two brands led parallel lives under BMC, before being absorbed into the British Leyland Motor Corporation in 1968. BLMC became British Leyland (BL) in 1970, and the subsidiary company in Bathgate, East Lothian producing the ex-BMC vehicles became Leyland Motors (Scotland) Ltd. The last vestiges of Morris or Austin heritage disappeared in 1984 when Leyland closed the Bathgate plant.
See also these Auto Review publications for other aspects of the story: AR061 (light vans from the J-type to the Sherpa, which are not covered in this publication), AR069 (Morris, including car-derived vans, also not covered here), AR078 (Austin, including their car-derived vans), AR152 (Leyland trucks and vans) and AR154 (Leyland buses and coaches).