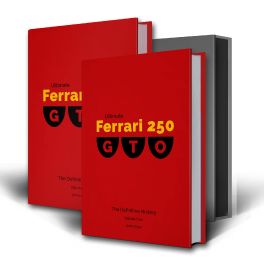 Ultimate Ferrari GTO explores the story of this iconic family of cars in more detail and with
more authority than ever before. Introduced in 1962 as the final evolutionary step in the
long-running 250 GT series, the GTO was the last and best GT racer of the front-engine era. It
remained at the forefront for three seasons, winning a hat-trick of World Championship titles
for Ferrari. Ever since, GTOs have retained their exalted status not just because of their racing
achievements but also their exquisite beauty, undoubted charisma and — for those lucky
enough to have experienced this — peerless driveability. Indeed, the GTO’s illustrative
reputation has made it the world’s most desirable car, as confirmed by the record-breaking
prices repeatedly paid for the finest examples. Packed with superb photographs, many not
previously published, this lavish two-volume production does true justice to this ultimate car.
Key content
• The build-up: the first volume begins with a close look at the GTO’s forebears, followed by study of its design
and development along with a full technical description.
• The 1962 season: between wins both on debut in the Sebring 12 Hours and in the year’s last race in The
Bahamas, the GTO’s activities are covered in full, not just in the World Championship but also in other
competition all over the world, including tortuous European hillclimbs and even adventures in Africa.
• The 1963 season: despite the endeavours of the opposition, the GTO’s supremacy intensified during its
second season, with more entrants running in more events, from endurance classics such as the Le Mans 24
Hours to sprints at obscure British venues.
• The 1964 season: Ferrari beat off a strong challenge from Shelby American’s Cobras to take its third title,
helped in part by an upgrade that included a revamped body design for new GTOs, and also for a few existing
ones.
• Later life: this section explains how GTOs continued to compete internationally and with occasional success
far beyond their sell-by date.
• Chassis histories: the second volume is devoted to comprehensive individual histories of the 36 GTOs, all of
which have survived to the present day. Packed with new research and fresh insights, these accounts include
interviews with owners past and present, information about restorations and participation in events, and
much more, plus a wide array of photographs.
Author
James Page grew up around motorsport thanks to his father’s involvement in sprints and hillclimbs, and spent his
childhood devouring the many car-related books and magazines around the house. After studying journalism at
Falmouth University, during which he contributed race reports to Motoring News and Autosport, he had a brief
diversion into the world of professional golf before joining Future Publishing in 2005 as a production assistant. He was
deputy editor of Classics Monthly (2007–11) before moving to Classic & Sports Car, first as deputy editor (2011–14),
then editor (2014–16). Now freelance, his activities include writing books, one of which is Ferrari 250 LM in Porter
Press’s ‘Exceptional Cars’ series. He lives in Gloucestershire.
Project consultant
Keith Bluemel is a Ferrari expert of world-wide renown whose body of work includes co-authorship with Jess G.
Pourret of the book Ferrari 250 GTO.