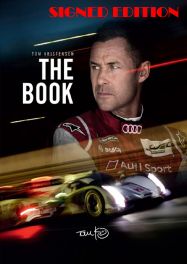 304 PAGES OF RARE AND NEVER-BEFORE-SEEN PHOTOS OF THE NINE-TIME LE MANS LEGEND TOM KRISTENSEN'S MORE THAN 35 YEAR CAREER IN RACING. INCLUDES COMMENTS AND UNIQUE STORIES BY THE LEGEND HIMSELF - WHO IS CALLED THE MOST SUCCESFUL RACING DRIVER IN SPORTSCAR HISTORY. THE BOOK INCLUDES TRANSLATIONS INTO ENGLISH, DANISH AND GERMAN.

Tom Kristensen is the most successful race driver in sports car history. The Dane is the only person to win the legendary 24 Heures du Mans nine times, six of which were consecutive. The former Audi- Bentley- and Porsche pilot is also the only six-time winner of the prestigious 12 Hours of Sebring. Tom Kristensen can also call himself a former FIA World Endurance Champion.

With more than 37 years in motorsport, Tom Kristensen is a true racing legend. He has won races in every series he has ever contested. Mister Le Mans, as he has been nicknamed, has been knighted in his home country of Denmark, inducted into Motorsport’s Hall of Fame and named Sports personality of the Decade – just to name some of the accolade he has received throughout his career

Tom Kristensen has retired from professional racing but remains an active ambassador for Audi. Tom is also a public speaker sharing his experience of the importance of teamwork. He is also heavily engaged in the fight against cancer.