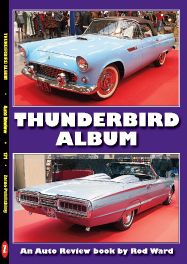 The Ford Thunderbird was originally conceived as a two-seater sports car, launched in 1955 to compete with the Chevrolet Corvette, but the Ford hierarchy was not thrilled by the limited sales they could get from sports car buyers.

The T’bird was soon repositioned as a ‘personal luxury car’ (something like the European grand touring car or GT), and in its second generation, from 1958 onwards, it became a four-seater. It grew in size, to become a clone of the Lincoln Continental, then shrank again, as successive fuel crises influenced buyers. The large Thunderbird coupe lost its appeal by the 1990s, and it ceased production in 1997. Ford decided that, after a hiatus of a few years, its successor should be a smaller retro-styled two-seater, but that had even less appeal to American car buyers, and it was only made from 2002 to 2005. The name of the car originated with the indigenous native Americans of the south-western states of the USA. The Thunderbird was a supernatural bird which protected humans from evil spirits. It flapped its enormous wings to create winds and thunderstorms, providing water for people in the arid deserts, ensuring their survival. Over the 50 years of its existence over 4.4 million Ford Thunderbirds were produced.

In these pages we see every evolution of the Thunderbird, over 11 generations.