XKD 603 - Through The Lens Of Time (Signed Copies Available) 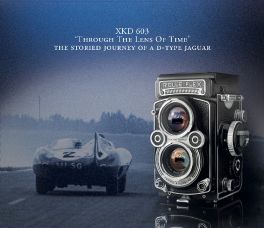 XKD 603 - Through The Lens Of Time (Signed Copies Available)

When one has a Jaguar that has been driven by seven different Le Mans Winners, has raced in more World Sportscar Championship and Front Line races than any other C or D type Jaguar (including four Le Mans 24 Hours participations), was both a Works and Ecurie Ecosse car, finishing second at Le Mans in 1957, yet remains today as one of the most original D-types extant, its story is both compelling and in this book, beautifully graphic.

Current owner, Clive Beecham, has self-published a 340 page homage to his car, drawing on superb period and contemporary photography to embellish the words of not just the four previous owners, but also luminaries such as Ian Callum, Willie Green, Carol Spagg, Dario Franchitti and several others. Clive also provides wonderful and detailed insights from Ron Gaudion, the Aussie mechanic who spannered the three consecutive Le Mans D-type victories and Hugh Langrishe, the Lap Charter for Ecurie Ecosse in that famous 1957 1-2 finish.

The book is a fine balance between the author’s often humorous and soulful narrative of those that were there in the day, and those that have enjoyed and experienced some of XKD 603’s sixty seven years. There are over 400 photographs with a fine mix of colour and black and white. Virtually all have been taken by recognised masters of their craft, with many virtually unseen portraits by Louis Klementaski, Phil Hill, Yves Debraine, Geoff Goddard, Bernard Cahier and others appearing throughout the book.

Only 603 copies of the standard edition will be published, along with 100 further copies signed and in a slip case.

D type XKD 603 started its career as a Jaguar works racer and then moved on to Ecurie Ecosse, for whom it scored its most famous result: second at Le Mans with Ninian Sanderson and Jock Lawrence in 1957. It is now owned by Clive Beecham who has put together this remarkable limited (to 603 copies) edition tribute running to 340 pages - it weighs a ton and is packed with an incredible 400 pictures from every stage of its busy life, all accompanied by comprehensive text. Genuinely a breathtaking homage.

All D types are special but arguably some are more special than others and the car which is the subject of this book is one of the latter.…… The book is simply terrific. In a large landscape format on high-quality paper this book pays homage to a magnificent car. Author and publisher Clive Beecham is a connoisseur of fine cars and has own some of the very best.…in total there are 250 colour and 150 black-and-white images from some of the finest photographers of the 50s, all deliciously reproduced in a large landscape format. The captions are informative and intelligent there is no index but perhaps that does not really matter too much since it gives an excuse for leaving through the 339 pages to find what you are looking for whilst enjoying again the superb pictures.

Having studied ‘Through the Lens‘ by Clive Beecham in more detail and having had the opportunity to devote time to enjoy the pictures, text and detail, I have to say that it is the best motoring book that I can ever recall reading. Superbly well researched, containing facts and many pictures I have never seen before. Brilliant.

The work has been a labour of love by author/owner Beecham and his approach to another single car profile has been refreshing. Deciding that he didn’t want to produce a dusty statistical record with detailed race reports, he has concentrated on telling the car’s life story through a quite exemplary collection of photographs – hence the title “Through the Lens of Time“.…… While its races in period as a frontline sports racing car are covered, they are not blow-by-blow reports, but are summarised and illuminated with fascinating side stories and pen portraits of the drivers and the story is brought up-to-date with details of its subsequent career in historic motorsport.

The volume has been self published and the quality is quite outstanding with superb design and layout . I cannot imagine it being better had it been handled by the most experienced of the quality publishers.

Lockdown has produced many self-starter projects; few of them can have had such impressive outcomes. This is the story of a car, one single car, but of a rare breed and with a very special historical trail behind it. XKD 603 is one of the works long-nose D-types that Jaguar fielded on the track; a mere 11 of these special works cars were assembled in 1955 and ’56, and 603 is one of only six survivors. That in itself is pretty damn good – any D-type is one of the gems in Britain’s motor racing crown, but these works cars not only have a fabulous racing record but also sport what many people see as the prettiest body variant of a stunning-looking car, the extended snout that elevates these Ds from their snub-nosed brothers and adds a vital few mph along Mulsanne straight.

Pointing out that 603 contains parts of two cars, has had several engines and two bodies and masqueraded under a false identity for some years makes it sound questionable, but since these things happened in the 1950s in the hands of the factory race team and its next owners, Ecurie Ecosse, it’s simply the hard life of a racing car. And since it’s all well recorded, as this book makes very clear, it’s a continuous historical entity making this perhaps the most original of survivors.

It’s an impressive career summary: in its 19 races in factory and Ecurie Ecosse hands seven Le Mans winners drove it. In the hands of Jock Lawrence and Ninian Sanderson it finished second at Le Mans in 1957, then headed south to contest the Race of Two Worlds at Monza, with all the evidence of that still present. Sneakily sold as the ’57 Le Mans winner by Ecurie Ecosse’s David Murray, it was first pampered, then had a highly successful few seasons in historic racing – Willie Green offers enthusiastic memories – before ending up with the book’s author, having raced the Orient Express on the way. Single-car books written or financed by owners can sometimes be sheer puff. Not here; this is a factual record, written with knowledge and a passion for history. I can say that because I know Clive Beecham and I’ve written about this car, so I’ve seen his extensive records, his photo archive and the various original related items he’s been able to collect with the vehicle.

Books about a single chassis number can also be repetitive, but Clive keeps the text lively, inserting memories from a vast range of people including Ron Gaudion, mechanic for all three D-type victories, Hugh Langrishe who was time-keeper in 1957, previous owner Anthony Bamford, Jaguar designer Ian Callum whom I had the pleasure of accompanying on a trip with the car, and even a man who knew the owner during its time in the States. Michael Quinn, grandson of Sir William Lyons, writes about the competition story from his famous forebear’s point of view. Farsighted as Lyons was, he couldn’t have foreseen that after the shadowed 1955 victory and its withdrawal from racing, a private team would add two more Le Mans notches on Jaguar’s bedpost. 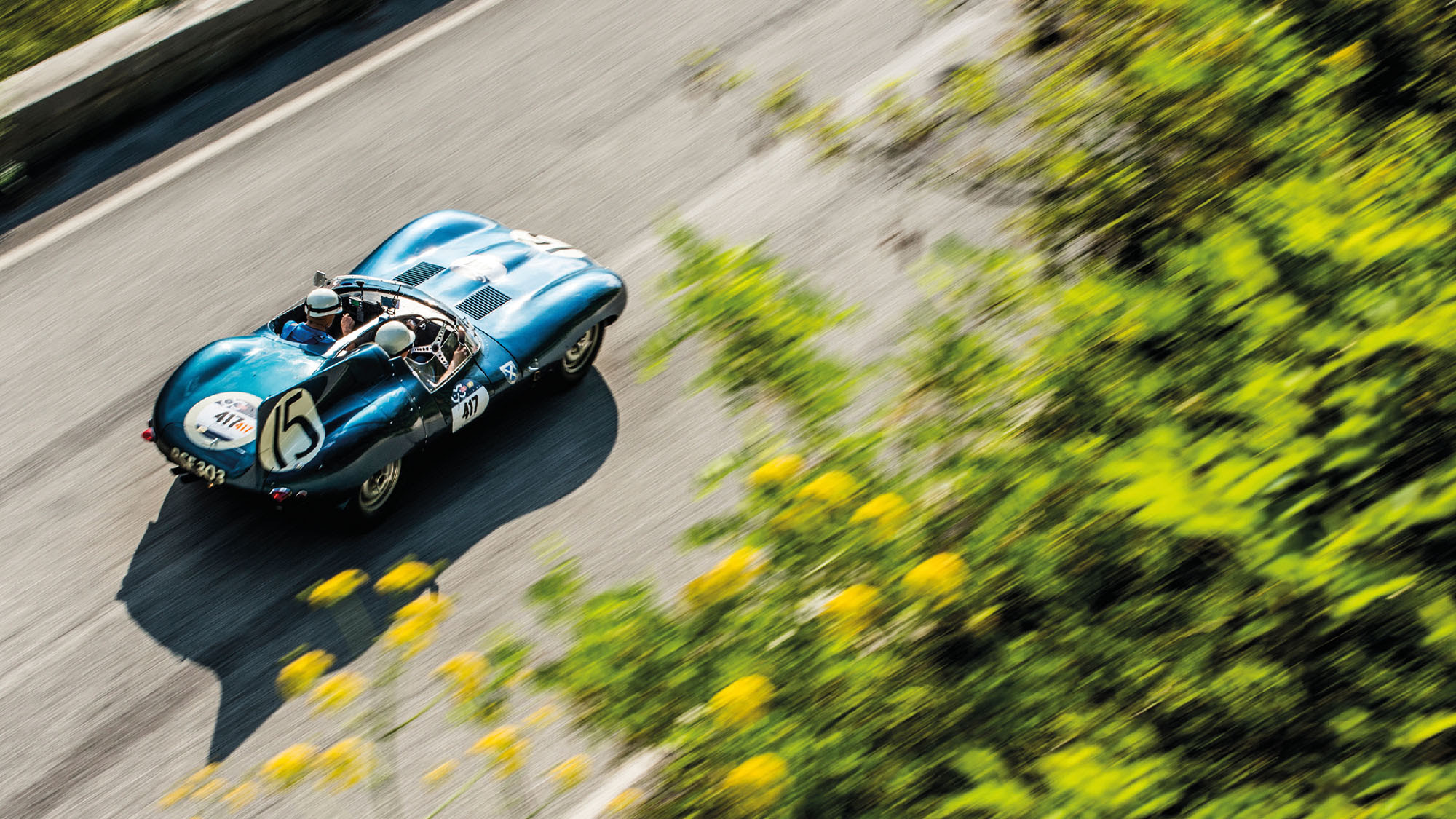 Though no longer racing, 603 joins in historic events like Mille Miglia

Arriving in a blue slipcase with fine metallic graphics the volume speaks quality, which continues throughout. For sheer visual richness it scores highly: they haven’t been afraid to use a grainy picture large if it serves the story, but especially impressive is the amount of colour period photography. Many photos are previously unpublished, and there’s some fantastic colour from the time that I’ve never seen before – Ninian Sanderson poking Duncan Hamilton in the tummy, the Monza banking with Moss’s Maserati and Hawthorn’s Ferrari 412MI pursuing 603 sporting the air-gulping scoop they fitted trying to cool the stressed rear tyre. Though removed afterwards, it survives and Clive has it.

Photography is not just from the famous circuits – there are pictures from Kristianstad and Crimond, and Jaguar’s rivals get their share of attention. As well as the huge range of pictures, the pages are enlivened with posters, programmes, pit passes and pull-outs of contemporary magazine coverage, as well as atmospheric paintings by Dexter Brown and others. Paperwork from the car’s original Le Mans entry forms to a hotel bill from the team’s French foray is pictured, confirming that Clive has left no paper unturned. One of the special things that enriches the car’s history is that it’s still accompanied by the precious little notebook the factory maintained for each car with every alteration and setting listed in neat handwriting, so this too is illustrated at the relevant part of the story. Even recent photos are dramatic – the anniversary run involving the surviving long-noses, parades at Goodwood, reunions with important figures, stunning shots of its Mille Miglia run with Ian Callum aboard.

Obviously the question of identity is central to the book, and Beecham goes carefully into the paper trail that led Jaguar historian Andrew Whyte to confirm that the car Murray sold to James Munro in the USA at the end of 1959 was this and not the ’57 winner. But it may be that Munro’s belief and his intention to preserve it for history is why the car has come down the years so unmolested.

Did I mention that this is Beecham’s first attempt at a book, and self-published at that? Like XKD 603 on its debut, I’d say he’s set a benchmark first time out.