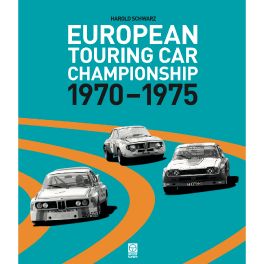 The first half of the 1970s was a golden era for touring car racing. The battles between Ford and BMW are legendary, while Alfa Romeo played its own important part in deciding races and championships.

This book delves into exciting races from the era and details the technology behind all of the important cars, including those from Abarth, Chevrolet, Fiat, Mazda, Mercedes and Opel. It’s a comprehensive overview of a fascinating time in touring car racing.