XKD 603 - Through The Lens Of Time : Signed and Numbered Slip cased edition 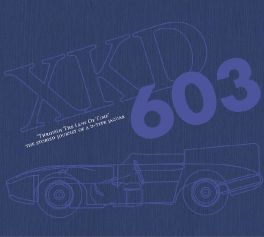 XKD 603 - Through The Lens Of Time : Signed and Numbered Slip cased edition

100 Copies signed and in a slip case.

When one has a Jaguar that has been driven by seven different Le Mans Winners, has raced in more World Sportscar Championship and Front Line races than any other C or D type Jaguar (including four Le Mans 24 Hours participations), was both a Works and Ecurie Ecosse car, finishing second at Le Mans in 1957, yet remains today as one of the most original D-types extant, its story is both compelling and in this book, beautifully graphic.

Current owner, Clive Beecham, has self-published a 340 page homage to his car, drawing on superb period and contemporary photography to embellish the words of not just the four previous owners, but also luminaries such as Ian Callum, Willie Green, Carol Spagg, Dario Franchitti and several others. Clive also provides wonderful and detailed insights from Ron Gaudion, the Aussie mechanic who spannered the three consecutive Le Mans D-type victories and Hugh Langrishe, the Lap Charter for Ecurie Ecosse in that famous 1957 1-2 finish.

The book is a fine balance between the author’s often humorous and soulful narrative of those that were there in the day, and those that have enjoyed and experienced some of XKD 603’s sixty seven years. There are over 400 photographs with a fine mix of colour and black and white. Virtually all have been taken by recognised masters of their craft, with many virtually unseen portraits by Louis Klementaski, Phil Hill, Yves Debraine, Geoff Goddard, Bernard Cahier and others appearing throughout the book.