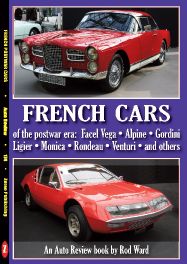 Before the Second World War France had a very wide selection of home-grown marques from which a buyer could choose a new car. The large companies returned to car production postwar; Citroën, Peugeot, Panhard, Simca and Renault. Some others limped on for a limited period postwar; Bugatti, Delage, Delahaye, Hotchkiss and Talbot Lago. Makers of large cars suffered under a punitive tax regime applied to engines over 9CV, so all of the luxury car makers failed. A handful of ‘second division’ car manufacturers tried to compete postwar; Salmson, Georges Irat, Licorne and Mathis, but none survived for long. France had been the home of many automotive pioneers, however, and French inventive genius continued to produce new car designs in the postwar years. In spite of the restrictions on engine size, there were a few attempts to recreate the grand touring cars for which France had been famous prewar. These efforts included Facel Vega, Monica and Venturi. French competitive spirit ensured that there would be racing cars and sports-racers; Gordini, Rondeau, Ligier and more. Many small firms depended on supply of engines tuned by Gordini and others, and on the skills of freelance designers such as Phillippe Charbonneaux. Some makers hitched their wagon to a larger star; Alpine linked with Renault, DB with Panhard, CG with Simca and WM with Peugeot. Almost 30 potted histories in this publication afford an insight into the smaller motor manufacturers in postwar France.