VANWALL : The Story of Britain's First Formula One Champions 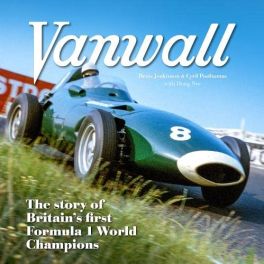 VANWALL : The Story of Britain's First Formula One Champions

Limited Edition - RRP £90 – limited to
1,000 copies; signed by Doug Nye
OVERVIEW
When international Grand Prix motor racing resumed following World War Two, the red cars of
Italy were the dominant force, and Alfa Romeo, Ferrari and Maserati swept all before them.
Patriotic industrialist Tony Vandervell – founder of bearing manufacturer Vandervell Products Ltd
– resolved to break their stranglehold over the sport with a team of British cars and pursued his
ambition with single-minded devotion and determination.
Deploying all of the engineering expertise and industrial might at his disposal, Vandervell
achieved his goal in 1957, when the Vanwall of Tony Brooks and Stirling Moss won the British
Grand Prix at Aintree. By the end of 1958, Vanwall had won a total of nine World Championship
Grands Prix and claimed that year’s inaugural Constructors’ Championship, building the
foundation for the considerable success that would subsequently be enjoyed by British-built
Formula One cars.
First published in 1975, this book offers a unique insight into Tony Vandervell and the rise of his
Grand Prix team and has been extensively expanded for this new edition from Porter Press
International with the inclusion of hundreds of official factory documents from the GP Library
archive – from telegrams and letters to lap charts and technical records. With a superb collection
of period photographs and detailed captions written by Doug Nye, the result is the definitive
history of this ground-breaking British Formula One team. Limited to 1,000 copies, the classic edit
KEY POINTS
- The full story of Tony Vandervell’s rise to Grand Prix glory, from the ThinWall Specials to
the Vanwall success of 1957 and 1958.
- New foreword written by Vanwall driver and six-times Grand Prix winner Tony Brooks.
- Hundreds of never-seen-before Vanwall documents from the GP Library archive, from
correspondence with Enzo Ferrari to driver contracts and technical data sheets.
- 200 superb archive photographs in colour and black and white, with detailed captions
written by Doug Nye.
- A complete race record of the ThinWall Specials and Vanwall Grand Prix cars - painstakingly
updated using official factory documents.
THE AUTHORS
Denis Jenkinson was born in London in 1920 and was first attracted by motor racing in 1932; it
became an all-absorbing passion from then on. Having won the 1949 World Championship for
sidecar racing as passenger to Eric Oliver, he joined Motor Sport in 1953 and became its
Continental Correspondent. Jenkinson famously navigated Stirling Moss to victory in the 1955
Mille Miglia, and never considered himself a professional journalist. Instead, he wrote in order to
enjoy all aspects of motor racing. He died in 1996.
Cyril Posthumus was born near Brooklands in 1918 and worked for Hawker Aircraft, AC Cars and
Lammas Ltd before joining the Royal Artillery at the outbreak of World War Two. He turned to
journalism in 1950, working for Autosport and Motoring News, among others. A keen and highly
respected motor-racing historian, he also wrote a number of books. Posthumus died in 1992.
Doug Nye worked for Motor Racing, Motoring News and Motor Sport before going freelance in
1968. He has written more than 70 books, is historical consultant to Goodwood Motorsport, and
co-curates the GP Library collection of racing photography with Sir Paul Vestey. A close friend of
both Jenks and Cyril, Doug is recognised as one of the world’s foremost motor racing historians.