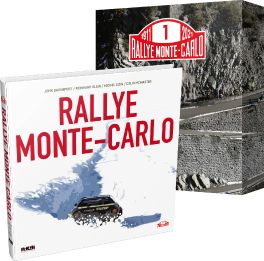 Ask ordinary people to name a famous motor rally and the majority will reply Rally Monte Carlo. Practically everyone knows the most famous rally of all time. Now the first major A to Z about this classic of rallying is published with more than five hundred photos on four hundred pages. The McKlein team with its photographers have combined with authors such as journalist and Monte Carlo Rally participant John Davenport and journalist Michel Lizin. All concerned have searched through their memories and photo archives and have found more than that for which they were searching. The result is a visually stunning book of amusement and diversions with the best stories from the ninety rallies that took place between 1911 and today.

What do apple pie, snow flurries and freaky spectators have in common? They all played a role in the big colourful Monte Carlo circus, and they all appear in these pages. The pastries were once given to the crews in the Ardèche, while the Monte is as legendary for its weather conditions as it is for the enthusiastic audience. The rally is an almost inexhaustible source of anecdotes, drama and fate. There are involuntary and deliberately chosen shortcuts, a suitcase full of spikes spends the night at customs in London, a co-driver is forgotten, buses and taxis drive along with the cars. And Michel Lizin describes a ride with Hannu Mikkola during the reconnaissance of the Burzet-Burzet stage as he sat clinging to the roll bar in the seatless rear of the Ford Escort.

Who knows today that the "wiggle-woggle", a simple test of driving skill, was once decisive for the Monte Carlo result? Or that points were once awarded for the most comfortable equipment? And of course, all the classics are there, from Alpine to Zephyr among the cars, from Antraigues to the Col de Turini among the legendary stages. Sébastien Loeb, Tommi Mäkinen, Walter Röhrl and all the other stars were always good for anecdotes, plus impressions in both words and pictures, exciting and moving memories and lots of exciting, funny and sometimes dramatic episodes.

Enjoy a trip through time covering one hundred and ten years, from the Rolls-Royce crews of the pre-war era to the antics of the Group B monsters, and to the WRC cars of today. Come on a long journey through the wildest snowstorms and sample the treacherous ice, experience the magic of night stages and learn how the photographers scramble to the best secret spots close along the stages.

On top of all that, there is also a comprehensive review of the rallies, from 1949 up to 2021 for every year.