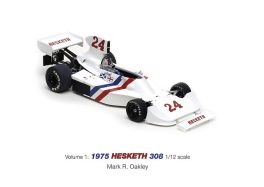 This is the first of several volumes to present on-going work in the production of one-off, non-commercially available, 1/12 scale detailed models of Formula One Grand Prix cars.

This book highlights the 1975 Hesketh 308 as driven to Hesketh's only Grand Prix victory by James Hunt who, of course, went on to be become World Champion the following year.

This volume is a second edition of a work originally self-published using Photobox in 2014, now completely revamped and improved. Here, you will read how the model was researched, conceived and built between 1997 and 2000.

This book was the author's first attempt at presenting the research and production of one of his models in published form. Subsequent volumes from Track Limits and MRO F1 Engineering will reveal more subjects, each one improving on the next as many new lessons and techniques of model building were learnt with each model constructed.