Lamborghini : At the Cutting Edge of Design 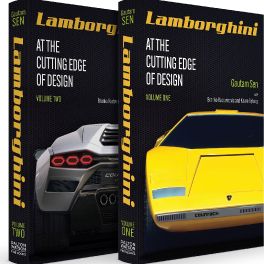 Lamborghini : At the Cutting Edge of Design

Stock Arriving around the 20th Of February

Since the unveiling of the Lamborghini Miura – the world’s first V12-powered mid-engine road car – at the 1966 Geneva Motor Show, this marque from Sant’Agata Bolognese with the raging bull emblem has been one of the most famous and desirable purveyors of the supercar. Valentino Balboni, legendary former Lamborghini test driver, has been famously quoted as saying “Lamborghini is a carmaker that makes engines, the job of the designers was to design the engine cover.” Yet, in its almost six decades long history, the supercar maker has constructed just four different engines: the extraordinary Giotto Bizzarrini-designed V12 that powered Lamborghini’s flagships for the best part of five decades, a promising V8 that almost brought the company to its knees, a V10 that uses many Audi components and has been the mainstay of the marque in the last two decades, and lastly another newer V12, powering the Aventador. However, what has really distinguished Lamborghini, has been a series of models with remarkable, groundbreaking shapes, each one a veritable design revolution. Cars like the Miura, the Espada, the Urraco, the Countach and the Diablo astounded and startled automotive fans just as much by their daring shape, form and aesthetic purity, as by their second-to-none engineering and trendsetting packaging. This book celebrates the design history of Lamborghini through numerous period reports and previously unpublished images, delving into the extraordinary shapes and the intrepid personalities who made Lamborghini what it is today. .