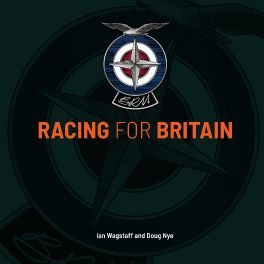 OVERVIEW
During the late 1940s, patriotic racing driver Raymond Mays hatched an ambitious plan to harness the
power of the British automotive industry and create a new Formula 1 car with which to break the
domination of teams from continental Europe. Having founded ERA before the Second World War,
Mays introduced for this latest project another set of initials that would pass into motor racing
folklore: BRM – British Racing Motors.
After a troubled start with the spectacular V16, BRM’s fortunes started to turn around, and in 1959 Jo
Bonnier scored its first World Championship Grand Prix victory at Zandvoort. The team’s crowning
glory came in 1962, when Graham Hill became the first British driver to win the World Championship
in a British car. That famous success helped to lay the foundations for the UK’s multi-billion-pound
motorsport industry.
Written by respected author Ian Wagstaff and renowned BRM authority Doug Nye, this new book
from Porter Press International has been produced with the Owen family, which supported BRM from
day one. It tells the full story of the team, from the difficult early days with the V16 to the glory years
of the 1960s and its V12 finale in the 1970s.
KEY POINTS
• In-depth history of BRM’s Formula 1 team, including its 17 Grand Prix victories and drivers
such as Stirling Moss, Juan Manuel Fangio, Graham Hill and Jackie Stewart.
• Full story of BRM’s World Championship-winning year in 1962, when Graham Hill pipped Jim
Clark to the title.
• A chapter devoted to BRM’s sports cars, including the famous Rover-BRM gas turbine racer
and the Can-Am machinery.
• More than 400 images, including a wealth of previously unseen material from the official
BRM archive, plus archive photographs from the world’s leading image libraries.
• Forewords by Sir Jackie Stewart, Damon Hill and the Owen family.
THE AUTHORS
Ian Wagstaff began compiling racing reports in the 1970s. He went on to become press officer at
Silverstone and then a trade press editor. He has been a freelance journalist since 1986, writing for
automotive industry publications as well as the motor racing media. Ian won the Guild of Motoring
Writers’ Pierre Dreyfus Trophy in 1986, and since then he has also received the Guild’s Montagu of
Beaulieu Trophy for his books The British at Le Mans and Tony Robinson: The biography of a race
mechanic. He won the 2010 AARWBA Book of the Year, a 2019 Motorworld Book Prize, and the 2017
Sydney Allard Written Media Award.
Doug Nye joined Motor Racing from school in 1963, before moving to Motoring News and Motor
Sport. Freelance since August 1968, he has written more than 70 books, is historical consultant to
Goodwood Motorsport, and co-curates the GP Library collection of racing photography with Sir Paul
Vestey. Renowned as a leading motor racing historian, Doug is also the world’s foremost authority on
BRM and has written a celebrated three-volume history of the team. He has been a member of the
Advisory Council of the National Motor Museum at Beaulieu and is a consultant to the Collier
Collection and Revs Institute.