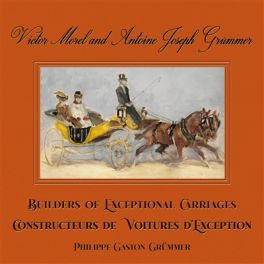 Maison V. Morel was founded in 1845 by Victor Jacques Morel (1814-1879) and became one of the most important Parisian coachbuilders during the second half of the 19th century at a time when France dominated the industry, replacing England as leaders in the field. Antoine-Joseph Grümmer (1834-1909) succeeded Jacques Morel in 1879 and the company became known as Société J. Grummer, formerly Maison Morel.

This book introduces the reader to many previously unpublished documents and illustrations of exceptional carriages and cars that were the pride of their owners both in France and overseas and describes their importance in the day-to-day life of Parisian high society. Mention is also made of the many high-quality suppliers who contributed to the manufacture of the carriages including Hermès, Louis Vuitton, and Boyriven.

The book is written in both English and French.