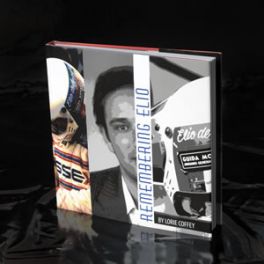 The words "Elio De Angelis, piano player, and gentlemen" always seemed to go hand in hand whenever journalists wrote about the young Italian driver. However, there was so much more to Elio. Not only was he a concert standard pianist, he was also a talented artist. In fact, had he not followed his passion and become a racing driver, he would most probably have become a architect in the family business. Elio started racing in karts in Rome along with the likes of Patrese, Gabbiani and Eddie Cheever who later became Elio's Brother in Law. He progressed to F3, then to Formula 1 with Shadow, before joining Lotus as No 2 to Mario Andretti. A year later he was the youngest driver to have the primary seat in a F1 team. His team mate was Nigel Mansell and the partnership developed into a great friendship.

When Mansell moved to Williams, Elio was partnered by the almost unknown Ayrton Senna, this was to become a difficult time for Elio. He would be pushed to one side in favour of the outstanding young Brazilian, and even when Elio was fighting for the Championship with Michele Alboreto, Lotus appeared to favour Senna. This had a serious effect on De Angelis, he later described it as the worse period in his life and felt he had no choice but to move on. He took a seat in the Brabham with fellow countryman Riccardo Patrese, but it was a partnership that was not to last long. In a private test session at Paul Ricard in 1986 Elio was involved in a fatal accident in the new Brabham BT55.

Remembering Elio follows the young De Angelis through his school years, to his first racing and subsequent F1 career. The 208 page, hard back book gives an insight into a fun loving man who was often in trouble as a result of his love of life and crazy panks, and several close friends and family have shared stories that will make you both laugh, and cry. With a foreword by Nigel Mansell this is a detailed account of a young mans life and racing career, and was written with the full help and support of the De Angelis family in Rome.