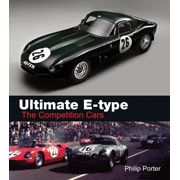 Published in May 2011 by Porter Press International, this beautifully produced and UK-printed 528-page hard-back book provides the full story of the 'competition E-types', this definition including the early steel-bodied race-prepared cars, the low-drag coup eventually raced by Dick Protheroe, and most importantly of all, the 12 aluminium-bodied 'lightweight' E-types produced in 1963/64.

With over 700 colour and mono illustrations, and the inclusion of many previously unseen factory memos and documents, this book is easily the most comprehensive work ever published on the E-type's racing career in the 1960s. The author Philip Porter (who is currently revising his previous major book on mainly the road cars - E-type, The Definitive History, due July 2011) has also interviewed some 200 people involved with the E-type including Sir Jackie Stewart, Dan Gurney, Roy Salvadori, Martin Brundle, Brian Redman, Peter Sutcliffe and John Coombs.

The book is in three parts. Part One covers the background to the E-type, explaining how the car of 1961 evolved from the D-type through the E1A and including the background to the E2A Le Mans racing prototype. Part Two tells the mainstream story of Jaguar's efforts to make the E-type into a race car, including the inspired low-drag coupe and the extensive work on the steel-bodied roadsters, but of course majoring on the 12 aluminium cars commonly known as the lightweight E-types. Part 3 contains an evaluation of the car, with comments from some period and many latter-day drivers and experts. It is illustrated throughout by a selection of photographs (including rare colour ones), the great majority of which will be new to even the most dedicated E-type enthusiast.