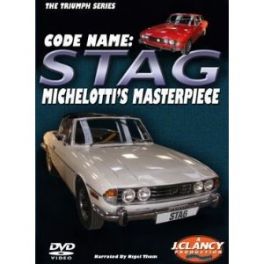 Triumph Stag Double DVD "Codename:Stag - Michelotti's Masterpiece" A J Clancy Production supplied by Clas6 classics Running time 2 hours 45 mins (approx) It has taken almost a year to produce this comprehensive history of the Triumph Stag. So much footage was amassed that the final production has ended up as a double disc package but there is still the opportunity to purchase the main disc on its own. The double disc contains a host of extras sure to please the most ardent Triumph enthusiast. Disc 1 runs for approximately 85 minutes with disc 2 about 80 minutes. A Single DVD version is also available - check our other listings The makers have tracked down the known surviving Stag prototypes and many other important early cars for this release; they have interviewed and spoken to Standard Triumph engineers who worked on the development of the Stag; Triumph historians have given their input, assistance and advice; and enthusiasts have allowed them to film their cars extensively. All this combined with a wealth of historic images and footage have helped to make this production the definitive story of the Triumph Stag. ***CONTENTS*** DISC ONE - 1 hour 25 minutes (approx.) - CODE NAME: STAG MICHELOTTI'S MASTERPIECE The origins of the car, the development, the prototypes, the fastbacks, the press launch cars, the production, the 4x4 Stag, the Hart Racing Stag and a whole lot more. With Graham Robson, Dave Jell, Tony Lee, Gordon Birtwistle, Tony Hart, Adrian Planterose, Peter Robinson and Alan Hart. Narrated by Nigel Thom. - THE MEN BEHIND THE MOTORS Extended interviews with Tony Lee and Gordon Birtwistle, two of the Triumph engineers behind the development of the Triumph Stag. - THE TICKFORD STAG DISC TWO - 1 hour 20 minutes (approx.) - STAG NATIONAL DAY 2008 - SOCTFL: NEW CYLINDER HEADS - ALAN HART & THE FASTBACK - KEITH BARNICLE: EFI STAG - A CHAT WITH ARTHUR SMITH OF STAGTECH - ADRIAN PLANTEROSE 4x4 STAG - THE STRAW DOGS CAR - TRIUMPH MARQUE DAY 2008