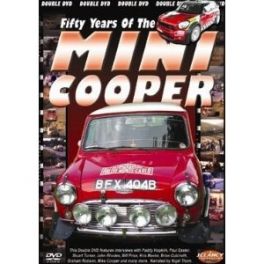 The Mini was a revolution in car design when it appeared in 1959. The Mini Cooper arrived in 1961 boasting higher performance, uprated suspension and disc brakes. Immediately successful in racing and rallying a legend was born and that legend lives to this day with the new breed BMW MINI originally designed by Rover engineers in Britain. This film traces the history of the Mini Cooper from its Mini 850 origins all the way to the present with a large focus on the Abingdon 'works' rally cars.Those who knew the cars best help to tell this story with such famous names as Paddy Hopkirk, Paul Easter, Stuart Turner and many more from the original BMC Abingdon team. Packed with never before seen archive film from 1960's rallies, recces and practice, plus a wealth of rarely and previously unseen images this release provides something for every Mini enthusiast anywhere in the world. We visit the Mini Sport premises in Padiham for an amazing tour that proves industry is still alive and well in Great Britain. Paul Easter shot some wonderful colour films whilst rallying in the 1960s and he talks us through some of the most interesting material which includes in-car footage from the 1962 Liege, coverage of the 1963 Tulip, practice for the 1965 Acropolis and 1965 Monte plus testing the 'works' Mini Cooper S in Wales, previously only ever seen in black and white. The new Prodrive MINI John Cooper Works WRC was displayed by Kris Meeke at Rallyday 2011. We arranged with the organizers to team this fabulous new car with original 1960's 'works' Mini Coopers and the results are displayed here. Natalie Gilbert brought GRX 310D along for the occasion; a car that is believed to have competed in more official 'works' events than any other Mini. Richard Casey was preparing his 180BHP Mini at the time of filming and we visited him in Lancashire to talk about his car. Plus Minis at Mamhead Hill Climb 2010. Total running time for both discs is approximately 3 hours and 20 minutes.