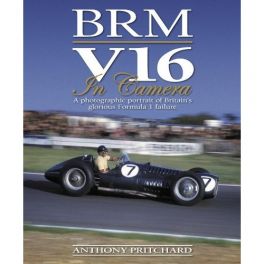 BRM (British Racing Motors) was a motor racing venture created in 1950 to represent Britain in the new Formula 1 category. A symbol of Britain s post-war rebirth, the BRM car did nothing by halves: its 1.5-litre 16-cylinder supercharged engine and advanced specification made it a technical tour de force, but it earned a reputation as a fantastic folly, such that Stirling Moss described it as without doubt the worst car I ever drove . This book is a fascinating portrait of a racing car that still engenders enduring fascination. The story of the BRM V16 is explored through a remarkable collection of 400 period photographs, many not previously published. The car s protracted and painful design and development is outlined in detail. Meticulous coverage of every race from 1950 to 1954. The things that went wrong: crashes, shredded tyres (owing to the engine s prodigious power), engine failures, team fallibilities, and so on. Biographies of all the personalities involved, including team boss Raymond Mays and designer Peter Berthon. The drivers are covered in detail: they include Stirling Moss, Juan Manuel Fangio, José Froilán González and Peter Collins.
Show More
Show Less