Mighty MG Magnettes of 1933 : The Cars, The Drivers, The Mystery (Premium Leather Edition) 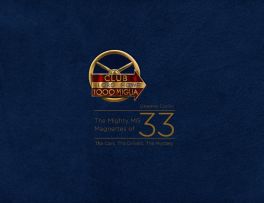 Mighty MG Magnettes of 1933 : The Cars, The Drivers, The Mystery (Premium Leather Edition)

This Premium Edition is numbered of 150 Copies.

The story of the Mighty MG Magnettes of 1933 covers the creation of the most admired British sports racing car of the 1930s, the K3, and how this car was campaigned with great success and a legend was born.
For a fleeting time, the cars from Abingdon were admired across Europe and found customers in far off lands including Australia and Japan.
Some of the greatest drivers of the era including Tazio Nuvolari, Sir Henry (Tim) Birkin and Captain George Eyston raced them and won.
This book re-examines the legend of the K3 to tell the real story of 1933. It traces the cars to the present day. Using many previously unpublished photographs from archives and collections around the world, this major work is an important contribution to the study of the history of Great Britain’s iconic sporting car.