How to Build a Pro Touring Car (Sa Design) 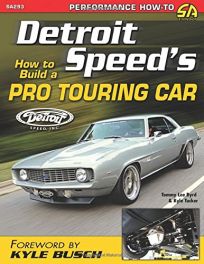 How to Build a Pro Touring Car (Sa Design)

"Trends in automotive modification come and go, some outlandish, some practical. Currently, the trend called ""Pro Touring,"" while expensive, definitely leans toward the practical. Originally a term coined for GM cars, the term Pro Touring has come to mean a style of all cars, and many eras. Pro Touring is essentially the art of adding modern technology to aged designs, creating cars that stop, start, handle, drive, and behave just as modern performance cars do. You can do this in many ways and choose from many suppliers. Detroit Speed is at the forefront of the Pro Touring movement. Both a parts manufacturer and car builder, the company is in a unique position not only to design and manufacture parts, but to build cars and test the parts for their effectiveness on the street and track. Kyle and Stacy Tucker have put their considerable skill in engineering and market savvy to create a unique company to lead the Pro Touring movement. Not only do you learn about the history of the company and how they design their performance parts, install sections cover front sub-frame assemblies, rear suspension assemblies, wheel tubs, fuel system upgrades, brake upgrades, driveline upgrades including an LS swap, cooling system upgrades, and more. The featured cars are customer builds as well as DSE test cars, which include a host of different Chevrolet products, a 1966 Mustang and a 1969 Charger. Detroit Speed s How to Build a Pro Touring Car is a vital edition to every performance enthusiast s library. "