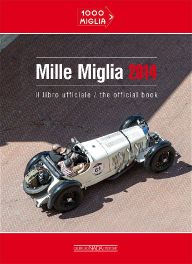 In 1977, precisely 20 years after the last unforgettable high speed Mille Miglia in 1957, the great race came back to relive its history all over again with the commemorative Mille Miglia, attracting once more to Brescia's Piazza della Vittoria the cars of the greatest, most prestigious race in the world that took place between the end of the '20s and the second half of the '50s. Since then, the Mille Miglia has gone back to being an event not to be missed, first every two years and then yearly for all motoring and motor racing enthusiasts. The book tells the story of this great sporting and cultural event, the 2014 edition of which opens with a historical section that recalls the 1934 race, won by Achille Varzi, and the 1954, with the magnificent victory of Alberto Ascari. After that, the book concentrates on the race that took place last May and its protagonists - competitors, crew after crew, car after car, in a long and fully-illustrated section. 2014 Mille Miglia starting grid was full of exceptional protagonists too: actors Luke Evans, Adrien Brody and Jeremy Irons, American TV personality Jay Leno, French stylist Paloma Picasso and industrial designer Mark Newson. Many musicians were also there: Brian Johnson, AC/DC frontman, British rapper Example, Scottish singer Amy Macdonald and Belgian singer Milow. Many racing drivers took the start, first and foremost Eros Crivellari, the only one with an original Mille Miglia to his credit, Andy Wallace, Jochen Mass, Teo Fabi, Bernd Schneider, Jacky Ickx, Martin Brundle e Bruno Senna, with the very evocative helmet of his late uncle Ayrton. This is indispensible publication for all those who were there, and for all vintage car enthusiasts.