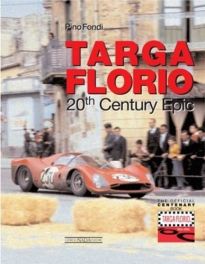 Many years ago in Sicily, the legend of the "Coppa Florio" and "Targa Florio" road races became one of the most emotive and prestigious expressions in world motor racing, second only to the mythical Mille Miglia. "Coppa Florio" began in 1905 while "Targa Florio" in 1906, at the dawn of motoring civilisation and evolved over the years, hand-in-hand with the ever growing popularity of the car itself. The narrow and tortuous roads of the Sicilian mountains were testimony to the feats of Fiat, Bugatti, Alfa Romeo, Maserati, Lancia, Ferrari and Porsche: manufacturers who alternated year after year at the top of the final classification of one of the toughest races in history, a race rich in allure and an ever present peril. On the occasion of the Targa Florio Centenary the book retraces this charming epics thanks to a vivid text and hundred of pictures, many of them unpublished. The work is complemented by a rich appendix (150 pages) reporting the complete results of all the Coppa and Targa Florio editions.