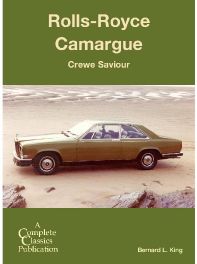 The latest volume in the Complete Classics series written by Bernard L. King covers a model which is very much love ‘em or hate ‘em!

At just 534 examples produced during the years 1974 to 1987, most would consider that this exclusive model was not a triumph for Rolls-Royce. However, following the failure of Rolls-Royce Ltd in 1971, the new prestigious Camargue styled by an outside organisation for the first time and purposely priced as the most expensive production car in the world, proved a big dollar earner for the U.K. and were attractive acquisitions for the emerging cash-rich Middle Eastern market.

More importantly, following the 1971 catastrophe, news of the Rolls-Royce flagship model was never out of the media and people flocked to see it in showrooms around the world. Although way beyond most people’s budget, Rolls-Royce and their dealers enjoyed many years of a captive audience, who often went away from the premises having ordered a somewhat cheaper model such as a Silver Shadow II, a Silver Spirit introduced in 1980 or a Corniche derivative of these types!

In usual Complete Classics format and including a complete production table incorporating guarantee date, initial colour, dealer’s name, first customer name, U.K. registration, country of delivery together with the family name only of known current owners and their location. Just 600 copies will be printed.