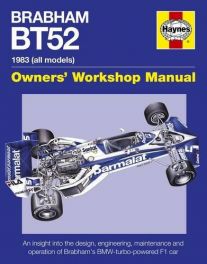 The Brabham BT52 was designed by F1 design genius Gordon Murray for the 1983 F1 season, and took driver Nelson Piquet to his second World Championship title after a classic season-long battle with Alain Prost (Renault) and Rene Arnoux (Ferrari). The car used the massively powerful turbocharged 1.5-litre, four-cyclinder BMW engine, which produced over 850bhp in qualifying, with the aid of specially developed 'rocket fuel' to boost power. Designed to suit new regulations, after ground-effect cars were banned at the end of 1982, the BT52 was very distinctive, with short, angular sidepods and a dart-shaped profile. During the 1983 season, the innovative Brabham team, with now F1 supremo Bernie Ecclestone at the helm, introduced the first high-pressure fuel rig seen in F1, to speed up refuelling stops, and used 'ovens' to pre-heat tyres prior to pitstops. This manual provides a fascinating insight into the design, evolution, operation and maintenance of the Brabham BT52.