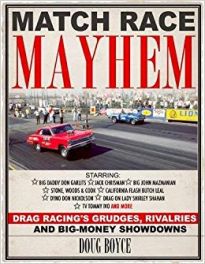 Drag racing is a very regulated sport. In the history of the NHRA, IHRA, and other sanctioning bodies, many classes existed in an effort to make sure the cars racing against each other are as equal as possible. It is a noble, if not futile, pursuit. You have two cars facing off that have very similar statistics in terms of weight, transmission type, fuel type, estimated horsepower, and all other sorts of measurables. The byproduct is that often the races that were "fair" were not the races that the fans wanted to see.

During the golden age of drag racing, fans didn't care as much about class racing as much as they wanted to see scores settled, rivalries battled, and interesting match-ups. There were the manufacturers rivalries, Ford versus Chevy, Chevy versus Mopar, Mopar versus Ford, as well as numerous driver rivalries. Match races were also a great way to feature wildly popular cars that no longer had a class in which to compete, yet the fans still wanted to see them. So popular and intense were these races that many track promoters didn't bother to promote class racing at all. Instead, they used the match races as headliners, similar to the marquee at your local arena or a billboard in Las Vegas, all resulting in putting more fans in the stands. And the drivers loved it too. Although the prize money for national events was fairly average for the day, the extra appearance fees and prize money to lure the most popular match racers to events increased the driver's take exponentially. Many of the most popular pro drivers quit class racing altogether just to go match racing.

Veteran drag race author Doug Boyce tells the tale of the history of match racing through the cars, the drivers, the events, the classes, the rivalries, and everything else that was fun about match racing during the golden era. It's all here, complemented by wonderful vintage photography provided by fans and professionals in attendance. If you are a fan of any class of drag racing, from any era, Match Race Mayhem is a fun addition to your racing library.