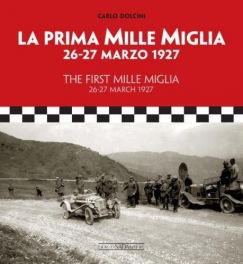 Ninety years ago the first Mille Miglia was held on 26-27 March 1927, so here is a new book that enables the reader to pin down a story which is not exactly secret, but has remained unknown until now. After exhaustive research of the Mille Miglia Archives, previously unpublished yet invaluable documentation came to light with the historic information they provide. This book tells of the first Mille Miglia's regulations, the analytical description of 1,618 kilometres of the route - a rare description of the Italian roads in 1927 - specifications of the 101 cars entered for the event with photographs of the drivers, the results list and times at which each entrant reached the various controls at Parma, Bologna, Florence, Poggibonsi, San Quirico d'Orcia, Viterbo, Rome, Terni, Spoleto, Ancona, Rimini, Bologna and Treviso. From this journey into the recorded history of the first Mille Miglia, out came the story of just what the event really was like: a giant utopian undertaking, from which the book now attempts to separate legend from reality. By studying documents most of which were previously unknown, a different story emerges of the 1927 Mille Miglia's various stages, what the drivers looked like and all presented as real people. And the illustrative material is partially unpublished.