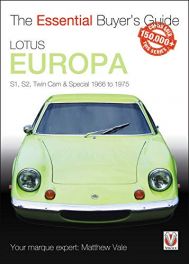 The Essential Guide to buying the Lotus Europa of your dreams, this book will guide you through all you need to know. Originally intended to be a cheap and basic Lotus Seven replacement, during its development the Lotus Europa morphed into a miniature supercar, described by Colin Chapman as a 'working man's GT40,' which sat alongside the Elan in the Lotus line-up. Its mid engined configuration gave it exceptional balance, and its handling and roadholding were second to none. Initially produced for export to Europe in late 1966, the Renault-powered car evolved into the Series 2 in 1968 when it was released to the UK and US markets, and, in its final iteration, gained the Lotus' own Twin Cam engine in 1971. Production ended in 1975 with around 9200 cars completed. This book has been written to provide the prospective owner with all the information they need to establish if the car is for them, and what to look for when viewing an example. All aspects of the cars are examined, including paperwork, mechanical issues, bodywork and interior with many photos of example cars to assist in the assessment of an individual car, and understand the implications of many of the common problems that a car can exhibit. The author is a Lotus enthusiast, and has been working on and writing about classic Lotuses for a number of years.