Ciao, Stirling: The Inside Story of a Motor Racing Legend 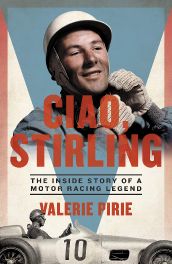 Ciao, Stirling: The Inside Story of a Motor Racing Legend

When Valerie Pirie interviewed for her first real secretarial job after college, she did not expect to end up working for Stirling Moss. Regarded as the greatest driver who was never crowned world champion, he would become not only her new boss, but a lifelong friend. Here, in this playful and moving memoir, she opens up about the man behind the steering wheel.

With a joie de vivre and unparalleled pluck, Pirie details the highs and lows of her many years working and occasionally living at very close quarters with a true pioneer of Formula One, recounting anecdotes from the track, the office and nights out in the West End of London with one of the best-known names in motor racing. Whether at Goodwood, Le Mans or the Nürburgring, Pirie was often there beside Moss to witness the wins, losses and technical malfunctions and, of course, his career-ending crash in 1962.

If she wasn't at his bedside in the hospital, managing his never-ending building works or on one occasion transporting his spare pair of dentures to France, Pirie was accompanying Moss wherever he needed her most. Never just colleagues, the pair were true companions, and this book brings to light the story of their enduring friendship from the classic post-war era of motor racing through to today.