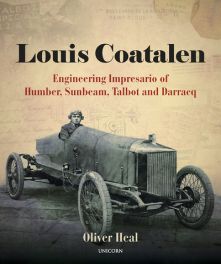 Louis Coatalen emerges from this biography as a man full of Gallic charm and wit, determined to obtain success for his products by whatever means necessary. His perseverance and a certain lack of scruples, his ability to recognise a good idea and recruit talented individuals, combined with his undoubted leadership skills made him a major figure in motoring history.

Coatalen s successes and failures are traced from his birth in Brittany, his training as an engineer in France, through to his rise to fame in the British motor industry, bringing success to both Humber and Sunbeam before WW1. His aero-engines were used extensively by the RNAS.

His personal motor racing story is told as well as that of his team management of cars and drivers that included the very first British car to win a Grand Prix and others that broke the World Land Speed Records on five occasions. During his later career after returning to France he built up the Lockheed Hydraulic Brake Company and also devoted much time and money to developing a powerful, but ultimately unsuccessful, diesel aero-engine.

His somewhat complicated private life involving four wives, drug addiction and some injudicious investments are also put on record for the first time.