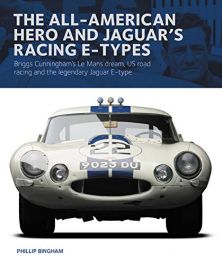 First seen by the wider world at the 1961 Geneva Motor Show, the Jaguar E-type redefined perceptions of how a sports car could – and perhaps should – look. No less a figure than Enzo Ferrari is said to have described it as “the most beautiful car in the world”. Small wonder that demand swiftly exceeded supply after Jaguar initially laid down plans to build the car in relatively small numbers. It was an instant hit on racing circuits too: little more than a month after the
launch, Graham Hill took a roadster to victory on its debut at Oulton Park. Chassis 875027, the focus of this story, was the first E-type campaigned by American racing entrepreneur Briggs Cunningham’s famous team and its performances
helped persuade Jaguar to use the E-type as the basis for a competition thoroughbred that has become one of the most coveted of all time: the Lightweight.
Key content
• The E-type evolved from a distinguished series of Jaguar sports cars that notched up a sequence of
victories at Le Mans in the 1950s. The car’s development is covered in detail and illustrated with
exquisite cutaways.
• Briggs Cunningham had an interesting tale to tell away from motorsport – as did many of his racing
companions. He skippered the winning yacht in the America’s Cup; his right-hand man Alfred Momo won
the Targa Florio as a co-driver, aged 14, and later climbed onto the wing of an airborne biplane to repair
a leaking fuel line. Their contrasting backgrounds are covered in detail.
• Before aligning with Jaguar, Cunningham harboured hopes of putting together an all-American team
capable of winning the Le Mans 24 Hours. His eponymous cars made their mark, without ever quite
fulfilling his dream, and feature as part of an engaging wider story.
• In addition to running some of motorsport’s best-known names, including Bruce McLaren, Dan Gurney
and Jack Brabham, Cunningham was also associated with several unsung heroes. Here, racers such as
John Fitch, Phil Walters and Walt Hansgen receive the credit they deserve.
• The book is handsomely illustrated with period photographs from some of the world’s most respected
collections, as well as a gallery of studio photographs showing the car as it is today.